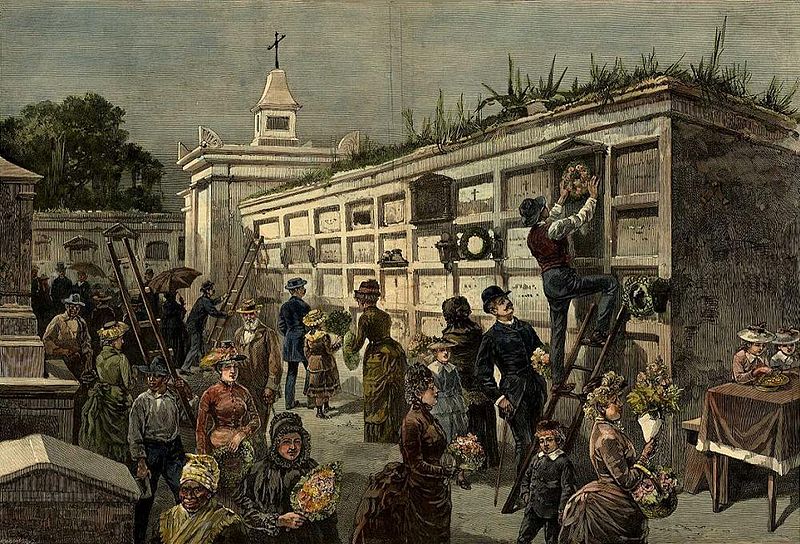 A Visit with the Dead on All Saints’ Day 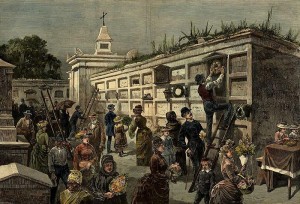 Mary Reporting. November 1st is All Saints’ Day, a holy day in the Catholic Church. The faithful go to Mass on this day, which is set aside to honor all the saints. There are thousands of named saints, canonized through the centuries after much study and authenticated miracles. But clearly there are millions of unnamed saints who have attained paradise. The Church dedicates this day to them.

New Orleanians, with their usual joie de vivre, take the day that honors the dead a step further. This being New Orleans, the celebrations often include food and wine. Funeral homes schedule Masses followed by refreshments. Family picnics at gravesites are common.

Many visit their forebears’ resting places to spruce up the aboveground tombs. They weed the surrounding grounds, scrub marble stones or whitewash the mausoleums made of brick with plaster façades. Then they decorate with festooned flowers and elaborate wreathes. Some make a day of it, traveling from one cemetery to another if their relatives are entombed in different “cities of the dead” in various neighborhoods.

During the 1880s when are novels are set, the entire city shut down. Vendors selling food, flowers and black glass wreathes lined the streets near cemeteries. Crowds gathered to visit their dead and each other. This wood engraving by John Durkin published in Harper’s Weekly in November 1885 is no doubt an apt depiction of the holy day celebration.

We included the custom in What a Widow Wants. The Collins family visits the grave of Bridget, Patrick’s wife, Maureen’s mother. Irishman William Collins is amazed by the odd celebration:

“Julia set out a picnic of lemonade, soul cakes, and the simple meal of boiled shrimp with Remoulade sauce, chicken and dumplings, and for dessert sparkling wine, caramel cake, pralines and chocolate, all of which had been the favorites of Aunt Bridget. As he enjoyed these delicacies, William had to marvel at the gorgeous fall sunshine, at the delightful way New Orleans imprinted its unique stamp on the church calendar.

Next, they got to work. Maureen, like a little general, sat on an iron bench, arranging flowers and directing Guy in painting Bridget’s tomb with a brilliant whitewash. Uncle Patrick strained the seat of his dress pants bending to de-root vetch and cat’s claw and William scrubbed the marble doorstep until it gleamed. The next several hours were devoted to decorating the tomb with arrays of yellow chrysanthemums, red coxcombs and wreaths of iridescent black glass and oyster shells.

Watching the care Uncle Patrick and Maureen lavished on the marble structure—he on a step ladder polishing the angel at the portico, she washing the stained glass—William’s heart twisted with a private grief, not for family members among the dead, but for those among the living who would die—his parents and his brothers; his older brother Cormac and his younger brother John, and of course his sister, Sarah, the unhappiest of all, on the other side of the world.”

Older
Auntie’s Chocolate Cake
Newer
Hope in a Jar: Victorian Ladies Made Themselves Up 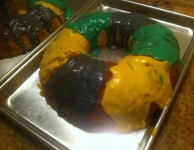