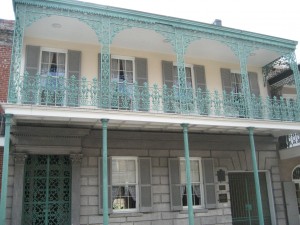 Renee lives in a home similar to the Gallier House, built in 1857 – Commons.Wikimedia.org

After six months in a loveless marriage, widow Renee Deselle vows never to repeat the error. Left a pittance by her wealthy husband, she throws her energy into Deselle Millinery, building it into the most popular hat shop in the city. But when a handsome Irishman barges into her shop, she begins to realize there’s more to life than hats.

William Collins, the new manager of his uncle’s cotton brokerage, arrives in America hoping to forget a certain Irish miss. A few moments with the beautiful milliner banishes all thoughts of his past romantic misfortune.

Each is willing to risk another heartache to pursue love, but dangers lurk beneath the city’s glamorous façade. Rumors fly about Renee’s past infidelities and William’s present dissolute habits. Strange men follow Renee whenever she ventures out, day or night. Thousands of dollars disappear from the Cotton Exposition’s treasury. William realizes someone is trying to kill him.

The couple struggles to learn the common thread linking these occurrences. Is Renee’s vindictive mother-in-law behind it all? Or does the intrigue originate higher up with one of the city’s ruling families? Can their love triumph when the city itself seems to be conspiring against them?

Renee’s first customer of the afternoon dashed from the shop, nearly slamming the bustle of her dress in the door. Sighing, she turned to her assistant. “Madame Voison won’t be easy to please.”

Michelle rolled her eyes. “And she doesn’t have a head for a hat.”

“Shush, don’t say it too loudly,” Renee scolded, though it was a comment she herself made on occasion after certain ladies left her millinery.

“I’m sorry, Miss Renee.” She lowered her voice. “You’ve always said there are two kinds of ladies in the world—those with heads for a hat and those without.”

“It goes for men as well.” Renee nodded toward the French doors that separated her shop from the haberdasher Lanoux, who specialized in men’s top hats, bowlers and boaters. Then she picked up her pen and drew a quick portrait of Madame Voison.

Michelle gathered the fabric samples from the counter and put them away in the chifforobe behind them. “I wonder if she was having a fit of some kind. Did you see the pulse throbbing in her forehead? She could hardly hold her neck still for me to measure her.”

Renee murmured in agreement. Madame Voison’s eyes had jumped with…what? Panic? Fear? She pushed the lady’s agitated state from her mind and focused on a hat design. With a swift stroke of the pen, she placed different styles beside the sketch of Madame Voison. A wide brim wouldn’t suit at all.

Michelle peered over her shoulder.

“Maybe we’ll make a bibi for Madame Voison,” Renee said. “Those very small hats are coming into fashion in Paris right now. If it’s placed high on her head like this”—she pointed to one drawing—“with a chignon strap in back under her hair rather than a chin ribbon to hold it in place, everyone will look up at the beautiful hat and her amazing eyes.”

Michelle clapped her hands. “You are a genius, Miss Renee.”

A deep male voice shattered the calm of the shop. “I should say you are, Miss, and I’ve not seen the sketch.”

Startled, Renee dropped her pen. A dark-haired gentleman leaned through the French doors. For one of Lanoux’s customers to peer into her shop and comment on her exchange with her assistant exceeded all bounds of propriety. But that alone didn’t account for her breath hitching in her throat, her mind going blank. This gentleman was strikingly handsome, enticingly tall, with prominent cheekbones and rich, dark curls that seemed calculated to offset the etched planes of his face, the aristocratic nose, the strong jaw and…remarkable eyes.

She jumped from her stool, then halted, trapped on the spot. The shop had grown uncomfortably warm.

Michelle, slack-jawed for once, said nothing.

“I beg your pardon, sir,” Renee managed at last. She dropped her gaze from those eyes and looked at her sketches, forcing herself to consider something—anything—practical, even as she felt his gaze rove over her hips and breasts, up her neck to her lips. What had this gentleman—obviously a newcomer to New Orleans—overheard? Had he seen Madame Voison, listened to their comments on her nervous state, heard Michelle say she had no head for a hat?

He bowed, a grin spreading across his face, his bright eyes twinkling. “I’m merely noting that you are quite smart to suggest a bibi. I’ve just come from Paris, and it’s quite the fashion for ladies of all ages and visages.”

Her skin grew warmer still, and she put a hand against her neck in a vain attempt to calm her racing pulse. Paris? The man had a deeply resonant Irish brogue, a sonorous, caressing voice.  Struggling to gain her composure, Renee fixed her eyes on him, noting his high forehead and full lips. “I’m quite sure I don’t need your approval.” She nodded a curt dismissal, but the man didn’t move. “Do you have any particular business in a lady’s millinery shop?”

“I might. It’s quite possible.” He grinned again. “One never knows.”

“I’m afraid you’d look perfectly ridiculous in a bibi with or without a chignon strap. I suggest you return to Monsieur Lanoux for something more appropriate.” She regretted the words as soon as they left her lips. Why was she reacting this way? She didn’t want him to leave. And he somehow knew it.

He bowed again, his smile deepening. And didn’t move.

“But what if I prefer your expertise? What would you choose for me—that is, if I insisted on purchasing a lady’s hat for myself.”

She met his eyes, which were glittering with humor. “For you”—she stood back and blatantly admired his face and hair. “I’d choose something full-brimmed. It would call attention to your handsome …” She stopped herself. Why was this man teasing her? She had work to do. She swallowed. “With ostrich feathers. Something flamboyant. Purple felt, I think.”

“What a grand entrance I’d make at the opera.”

“Alas, so staid compared with purple felt. But when in Rome ….” He sighed dramatically. “I suppose you’re right. I must see Lanoux.” He bowed once more and retreated to the men’s shop.

Through the thin lace curtain covering the glass doors, Renee watched him in conversation with Lanoux, who now placed felt and beaver prototypes on the counter. The Irishman stood at least a foot taller than the shopkeeper, and an impeccably tailored charcoal gray suit made his broad shoulders, narrow waist and long legs all the more appealing.

Michelle remained beside her. “That gentleman,” she whispered, “has a head for a hat.”

He did, indeed. Her breathing erratic, Renee tore her gaze away and made a show of returning to her sketches, but Michelle, clearly fascinated, watched the scene unfolding next door for some moments before sighing and retreating into the back workroom.

Her assistant, all of nineteen, worked hard but was easily distracted by the young men coming and going at the haberdashery. Believing they needed a stimulant other than the gentleman next door, Renee sent Michelle to the café on the corner for coffee, then set herself to drawing the bibi in different colors and trims.

Every time she turned her head to select another pastel, she glimpsed the man standing at the counter trying on hats—modeling hats—handed to him one by one by Lanoux. Lord, she was no better than Michelle! Now and then he ran his hand through his hair and turned his head slightly as if he knew he had an audience. He carried himself with an air of confidence that had Lanoux bowing before him.

The shopkeeper began filling out his order form. Any minute, the gentleman would shake hands with Lanoux and leave the premises. A stab of disappointment surprised her with its intensity. She hoped he might step back in and apologize for his earlier interruption. Perhaps she should be the one to apologize. She hadn’t been particularly friendly. And now she so wanted to hear that deep, booming voice again, look more closely at his face, at the eyes she believed were blue.

Full of rich historical detail, The Willing Widow offers a glimpse of life in New Orleans in the 1880s. Renee Desselle is a widow, somewhat free of the social constraints of the time. She is a milliner with her own fashionable business. When the dashing William Collins, newly arrived from Ireland to join his family’s cotton brokerage, enters her shop, they face an instant attraction. Yet their love is thwarted by social strictures. Madame Soniat, Renee’s former mother-in-law, hates Renee and has been slandering her reputation. Based on a misunderstanding, Renee becomes convinced that William is a rogue. As if that were not enough, William becomes involved in a dangerous investigation of fraud at the Cotton Exposition. As Renee and William struggle to overcome the barriers to their happiness, both their lives are threatened.

Verdict This debut romance with a mystery element makes for a compelling read from mother/daughter writing team LeCoeur. Renee’s widowhood allows for believable and well-detailed sexual escapades within the historical context, and her status as an independent business owner underlines the restrictive plight of women of the time period.—Henry Bankhead, Los Gatos Lib., CA 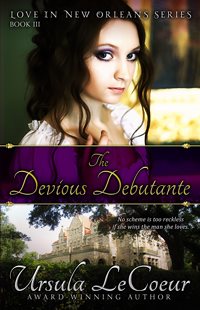 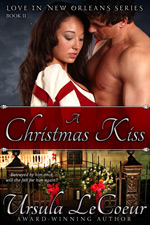 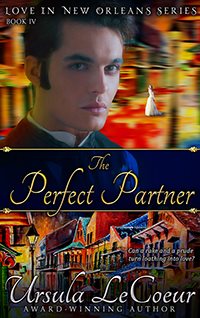 The Perfect Partner
Look Inside